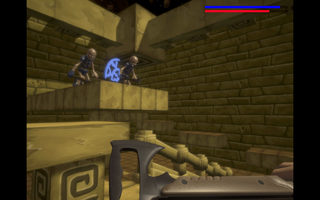 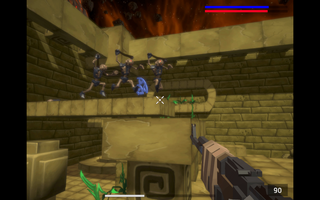 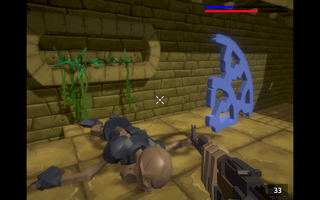 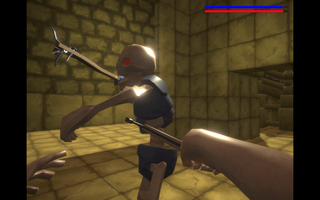 I've been working on Temple of Darkness during the first half of October, and I've added a couple of things. Scroll down to download the current dev build (Win/Mac), and read on for some details.

It's not fancy, but it has a couple of useful features: now you can set the graphic settings (resolution, quality and post-processing) and the mouse sensitivity.

In the original version it was the music what determined the end of the level (around 2min long). If you managed to survive, the level was finished and you'd progress to the next one. This was not very conventional, and many people (most?) didn't notice it. Although I quite like the idea that the music determines the length of the level, I'll explore that mechanic in futures games, and simplify ToD to be closer to what you'd expect from a FPS.

The new mechanic is that you have to find a piece of an amulet in order to progress to the next level. Of course you still have to run, because the light keeps going dim, and there's only a limited amount of light orbs per level. But I think and hope this makes it more straightforward and easier to understand.

Additionally, this adds an interesting twist, which is that the piece of the amulet tends to be a bit tricky to get (you might have to jump around, and it will probably be guarded by some enemies). This I want to polish, it's a bit rough at the moment, but it'll get better once I have more enemies to play with.

Each amulet has four pieces, once you find the four pieces to advance to a new 'section' of the temple. At the moment that doesn't have any particular relevance, but further on I want to introduce new elements in each new section, to create a certain sense of progression.

Get Temple Of Darkness

Fast-paced, old-school FPS with a twist